A Review of Unikkaaqtuat by Dr. Michelle La Flamme, 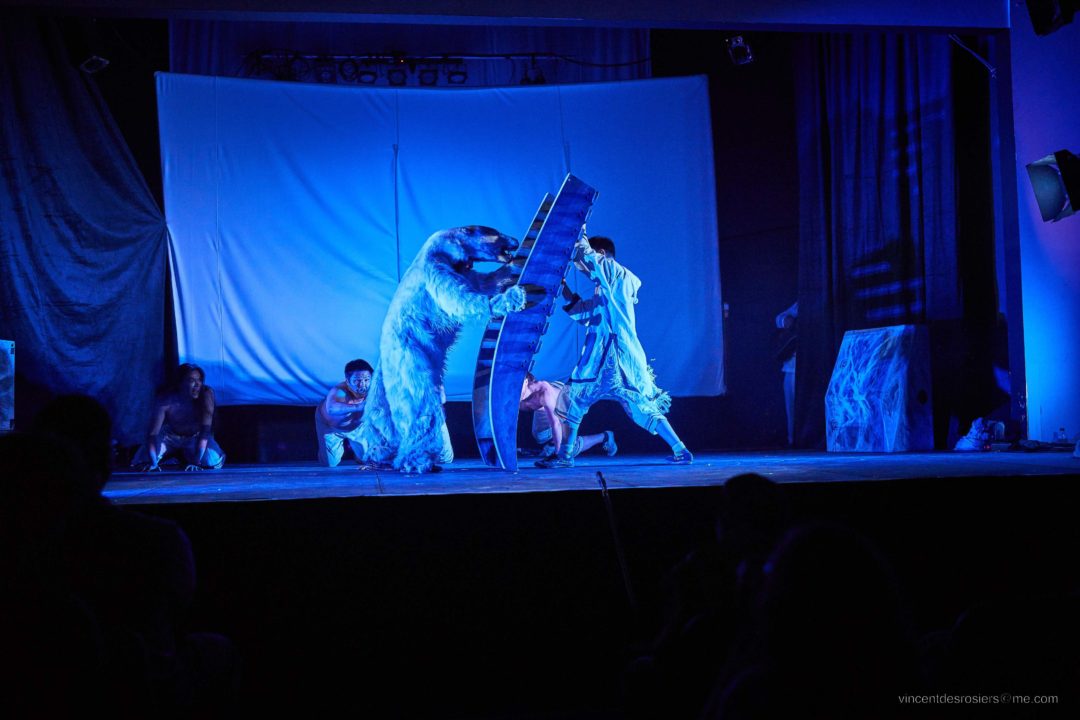 Co-productions can sometimes produce amazing results.  Artcirq, The 7 Fingers of Montreal and Taqqut Productions fuse their creative power to create this show running January 22-25 at the Playhouse Theatre in Vancouver.  Artcirq is an “Inuit circus performance collective based in Igloolik, Nunavut, The 7 Fingers is a collective of circus artists who have many performances and are “ambassadors of diversity” and Taqqut is an Inuit-owned film production company located in Igaluit, Nunavut.  This fusion creates “contemporary circus” yet this production is moored by the powerful Inuit storytelling that is featured in the mythological section of the story as Unikkaaqtuat means “the old stories”.

This performance begins with a brilliant, oversized night sky projected onto a huge scrim as the openness of the land up North and the fierce power of the cold is made visceral.  Director Neil Christopher brings a realistic story to life in a performance that incorporates the present and the distant past by way of the mythic stories that are shared.  The individual story of a man who is ill in the hospital is the backdrop for the mythic story that unfolds. The language of an ancestral Inuit storyteller is heard in voice-over as a through-line for the visual story being shared on stage.  Nothing was translated into English so the audience had a somewhat disorienting experience requiring even more reliance on the senses to navigate the narrative.  The realistic frame grounds the storytelling in a contemporary space of a hospital bed where the primary character receives a letter and a cassette from home that documents his namesake.  Through magical realism we are propelled into his subconscious mind as the land of his ancestors is evoked and the voice transports him into story and the land. A beautiful score and evocative use of lighting set these simple features in the larger story to great effect.  Dreamlike. In one scene, a hunter in traditional Inuit garments is telling parts of the story while working on his bow and this simple moment was awash in a golden hue set on a barren stage with a full blue-hued backdrop evoking the far north.  What you cannot understand in the language, you can feel in the sound and visuals. Effective use of animation on the big scrim at the back of the stage and very restrained and subtle use of lighting were used to express the raw emotions of the story. The show is about the transmission of intergenerational knowledge and the healing power of oral history.

The world we are transported into is represented mythically on the screen projections as the stage is peopled with dancers and a riotous circus element that moves the story along.  Frequent blackouts created a fragmented story line for what otherwise is a surreal, visual feast.  Silhouettes, the use of a boat that doubles as a dog sled, a lumbering polar bear and the appearance of the mythical rabbit and raven figures helped in the visual telling of the tale.  Size and scale were manipulated to give a sense of the enormity of the mythic dimension as well as the surreal nature of the mythic figures including a blind hunter, a capsizing boat with a woman’s long hair being braided, and a hunter fixing his bow and sharing teachings while seamlessly becoming the character who begins as the disembodied voice-over at the start of the show.

Music is woven throughout this performance from an eerily captivating soundscape, to realistic sled dogs, to throat singing, to guitar and accordion hinting at a kind of contemporary folksy/bluesy Northern sound.  Everything was subtle and restrained including one scene in which a single solo drummer rhythmically supports the understated but haunting vocals delivered by the solo singer on stage.

This is mythic Inuit storytelling told through the tools available in the world of the theatre, including a scrim effectively used for projections, a simple set with blocks that doubled as a glacier, ice flows and climbing apparatus for some of the gymnastic numbers. The incredible physicality of the ensemble was demonstrated in multiple ways throughout the performance from boasting rivalries about dexterity, to displays of bravery in feats requiring acrobatics and risky climbing, to hand games and physical feats involved in some trapeze work.  The teasing and fun that was expressed on stage made the characters very memorable and clearly offered a positive and upbeat environment for the actors to feel literally and metaphorically safe and supported. The interesting costume design gave the impression of leather without the bulk or weight.  The ensemble work was outstanding and the joy that was expressed during the acrobatic and communal scenes was palpable.

Also, though we are used to seeing lithe performers do acrobatic feats in contemporary performances from Cirque Du Soleil to Cavalia, we are not used to seeing Inuit performers engaged in such acrobatics.  In one mesmerizing scene two Inuit performers face each other and gently begin to swing using the acrobatic elements to portray the important messages of the story.  We see these two women characters use the silks in very simple ways to portray dead female mythical figures floating in the sea set against an enormous backdrop of the sea projected behind them.  What was also exceptional and unique in the staging of the circus element was the final acrobat who was hoisted onto the stage by the community of actors using a pulley system and a very thick rope as his graceful and fractured movements symbolically represented the birth of a figure from the oral story.

The weaving together of this powerful Inuit mythical story into the world of the central character’s life enables him to transcend the physicality of the hospital bed and emerge within the landscape, connect with his ancestors, discover his namesake, be inspired by his ancestor’s voice and, ultimately, heal! The performance features the comradery of the “community” as circus ensemble in order to demonstrate the healing that is part of the telling/sharing.  The choral vocal work and the ensemble work was playful and energetic giving a sense of deep ties to the land and connections forged in small Northern communities.  Even without knowing the full translation of the voice over, one can feel that this performance is a reminder of the importance of maintaining a connection to community and honouring the wisdom in ancestral knowledge.