Set Designer and Director Martin Tulinius is a visual artist with an eye for the grotesque. Which makes his and Republique’s decision to delve into the medieval painter Hieronymus Bosch in collaboration with the anarchistic contemporary circus company, Les 7 Doigts, an almost obvious one. Republique’s new show, Bosch Dreams, is most certainly a wondrous journey into a strange medieval world with naked bodies paying both Paradise and Hell a visit and with equal amounts of curiosity.

Hieronymus Bosch died 500 years ago. The Canadian director Samuel Tétrealt and the Canadian video artist Ange Potier have, in collaboration with Martin Tulinius and the dramatist Simon Boberg, created this impressive, wildly visual show of highest international standards in celebration of the artist.

On his journey through the images, the professor-like character comes across a half-naked acrobatic girl, who can do handstands and slits into all sorts of risqué positions – in the middle of a flower. Because the earthly paradise comes alive right in front of the audience, in the shape of Ange Potier’s crazy dream-like video design, where everything changes, as you watch.

Suddenly, the surrealist painter Salvador Dalí appears amidst Bosch’s landscapes, staring fascinatedly at the beautiful acrobatic girl. Soon he is joined by Jim Morrison, who together with his band The Doors produced the song “Ship of Fools”, which is inspired by a Bosch painting.

“What is good – and what is evil?” Those are the questions posed quite open-mindedly in the show’s wise and offbeat discussion on medieval ideas about Paradise. Not least reflected by the dying Bosch, lying in his bed and obviously dreaming himself into the Garden of Eden.

Yet it is the images of Hell that are the most powerful. When the entire stage becomes an inferno and the fearless artists crawl up burning houses to save each other, Judgment Day looms everywhere, framed by a soaring choreography that constantly strives to leave gravity behind.

Visually speaking, Bosch Dreams is heavenly. There is beauty and never-ending idyll – combined with elegant muscles, effortlessly performing the most brilliant acrobatics. There are heaven-bound angels, but also self-revolving, horror-filled monsters. 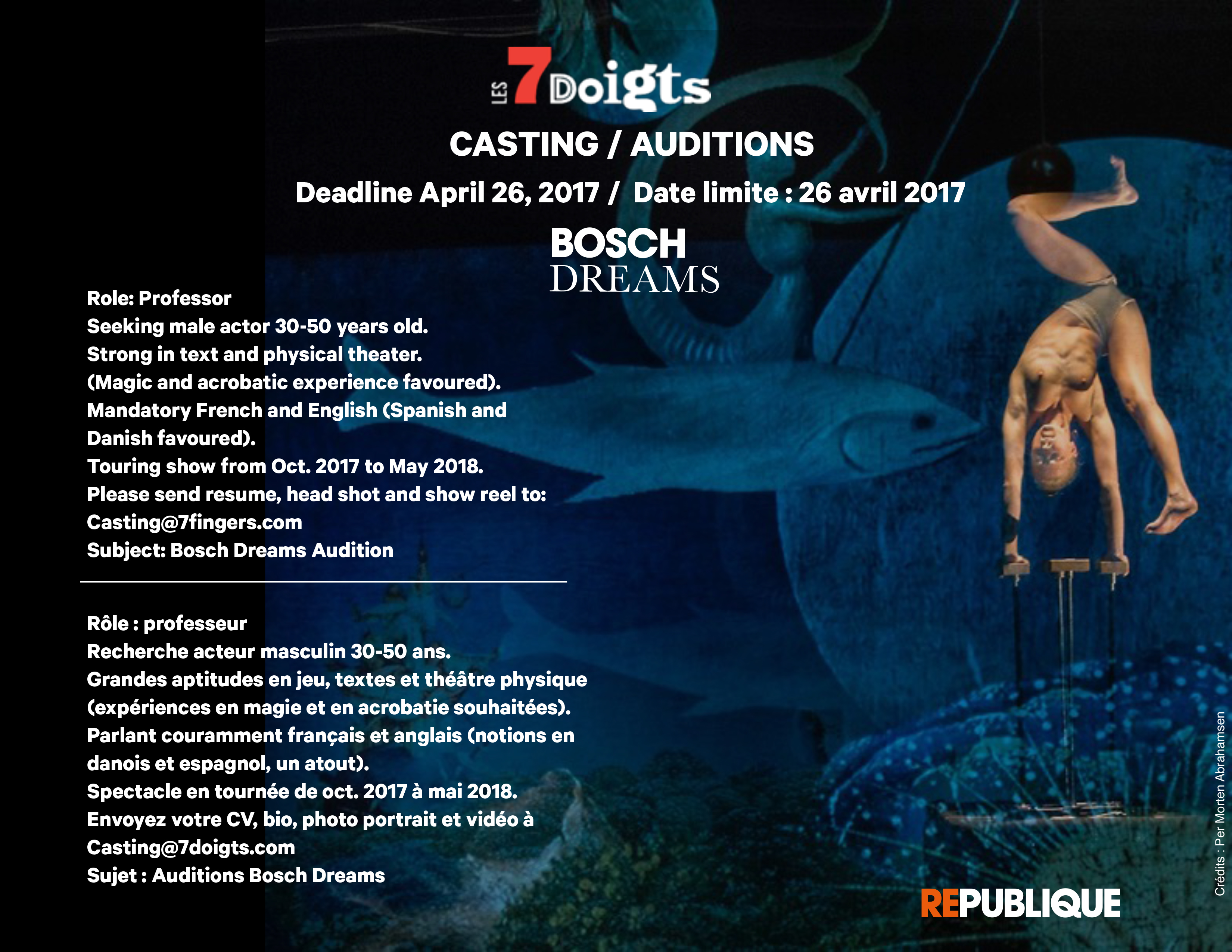 [SEQUENCE8] – rehearsals before the Canada and USA TOUR